I grew up with television.  I never remember not owning a color television.  We had cable for most of my life.  I remember looking forward to weekends at my sister's house where they had HBO and we chowed McDonalds to movies featuring nudity and profanity.  Good times.  When I bought my own home, my first call was to the cable provider.  When they told me installation would be $5000 (in 1990), I installed an antenna.  At that time, Pats home games were generally blacked out, so everyone [who cared] came to my home on Sundays as I could pull in a Maine station that was outside the blackout area.

When my first born started kindergarten, we decided it would disadvantage him to not know what Sponge Bob Square Pants was all about, so we hired Dish.  Dish was fine, but as we started paying separately for phone, local long distance, long distance, 'technology', high speed internet, and cell phones, the cost of communications and entertained topped $300/month at my house.  Comcast consolidated everything except my cell service for $99.99/month...for 24 months.

At the end of the 24 months, my bill increased dramatically.  I offered them $149.99 for my package if they guaranteed the price for life.  They countered with a bare bones package for 6 months for $99.99.  I took this as a challenge.  I immediately purchased an OOMA Hub and Scout VOIP hub.  It cost me $205, but home phone has been free since October of 2009.  So, $1.80/month for unlimited local and long distance calling.  I called Comcast and told them I wanted to drop phone service (on my bill at $50/month) and they took it off, but the savings was offset by loss of my triple play discount.  In January of 2010, I purchased a DB8 antenna from Amazon for $90.22.  When we lost power and cable for a week in February, I plugged in my generator and hooked up my new antenna.  We watched the winter Olympics via an antenna.  Good stuff.  When cable came back, I left my television on the antenna.  At the same time, Comcast began their transition to digital.  We had digital televisions, but they started moving the 'good stuff' to channels that required a box.  Local broadcast television was SD without a box.  Within a few weeks, both of my kids asked to have their televisions put on the antenna.  The wife was a holdout -- we had a DVR in the living room and food network was the background music of her life.  By April, she had warmed up to the PBS Create channel and we decided to fire Comcast.

Fairpoint offered me unlimited internet for $49.99/month guaranteed for life.  So, we were saving $100/month off the bare bones post-promotion Comcast price.  In the first year, I spent $1000 on five DTVPal DVRs.  I broke even in the first year, but had DVRs in all three bedrooms, the living room, and the kitchen.  DVRs would be my biggest expense going forward.  I've spent about $3000 on DVRs over nine years -- $333/yr, $28/mo, $5,56/mo/set.

When we fired Comcast, we did not think we needed a DVR.  The one DVR in the house was loaded with unwatched episodes of Bonnie Hunt and Who Wants to be a Millionaire.  It did not take long for us to fully appreciate the DVR -- pausing for dinner or a phone call, rewinding after a snooze or to re-see something that could not be unseen.  Putting a DVR on each television dramatically enhanced the television viewing experience.  I am very happy with my DVR+ DVRs and TiVos, but I just bought a Recast and a Tablo TV DVR.

Right now, I have DirecTV at a steeply discounted price as a consequence of having an obscenely expensive cell phone plan.  I'm halfway through the promotion and will not likely have the expensive phone plan after that, but, for now, I have a lot of channels including HBO.  I still mostly watch broadcast television and my kids mostly watch Netflix.

If you want to know what I have spent or played with over the nine years, take a look at this page...

So, I saved $11,400 and spent $6,000 on infrastructure and toys netting about $50 per month in savings.  Not much savings really, but I would not trade what I have for what I had.  In fact, once when I was researching Comcast prices for a blog post, my wife walked in and let me know she was not willing to give up the antenna for Comcast.

So, what exactly do you get with an antenna?  That depends on your location and your antenna.  I recommend people interested in broadcast television start at http://tvfool.com/.  A report for you address or coordinates will help you understand how easy or difficult antenna reception will be at your home.  Google the wikipedia page for each station you are likely to receive to see if there are sub-channels.  Pick and point an antenna and you are good to go.

If you want help analyzing a TVFool report, selecting an antenna, or cutting the cord, PM me or respond to this post.

Most people want to know what I would buy if I were cutting the cord right at this moment.  For me, right now, I think I would get an Amazon Recast and a bunch of Fire TV Sticks.  In fact, I have done that.  It's not for everyone, but it works for me.  I have had Amazon Prime for some time.  Mostly for shipping, but I enjoy the streaming media and use a photo library as the background for my Amazon Shows.  I have a Recast, so I am able to watch television on my Shows (I have seven) or any device that is attached to a Fire TV Stick.  The Recast only supports two concurrent streams, but that is plenty as my kids tend to watch Netflix.  Some things I like about the Prime solution...

Most of the cord cutters I know simply run a cable from an antenna to a digital television.  That is FREE TV.  Respect!  If you are thinking along those lines, consider a TCL Roku television.  These are the best televisions for cord cutters.  They get guide data from the broadcast stream (PSIP) so there is no need for an ISP or phone line to get updated guide data.  If you plug a USB stick into one of these, you can pause, rewind, and fast forward through four hours of programming.  If the USB stick is loaded with pictures, music, or videos, you can play those.  If you have come to rely on a smart phone for online activity and are thinking you need to keep your high speed internet for streaming entertainment, think again.

I'm also a fan of the Tablo TV DVR.  No Prime integration and no OTT integration, but it's a great whole house DVR.  You can get one for $100 at Best Buy right now.  You will need to add a usb disk.

I own five TiVo Roamio OTAs.  Awesome set top box.  I paid $300 for my first three with Lifetime and $200 for the last two.  Great set top box.  The Mini is the best implementation of remote access I have seen.  I wish I could recommend a TiVo, but the only OTA TiVo is out of stock and $500 with 'All In' service plan.  Add a Mini for a second set and you are in almost $700!  As much as I paid for my last three TiVos combined.  Keep an eye on Woot for deals on the Roamio/OTA and previous gen Minis.

May Day!
May Day!

YAY! It's May! School is almost over(youngest graduates HS this year)! Check me in Brad,please.

Rabbit!  Rabbit!  It's May, and my eldest will be graduating from High School.  I can't believe it! 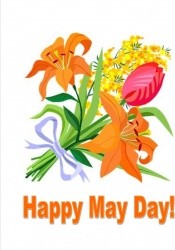 Happy May, y’all. Star Wars Day is almost upon us!

Can’t believe it’s May already. Where is the time going? I also have one graduating this month.

Checking in for May.  Hope everyone has a wonderful month!

MAY the Force be with you in all your deal hunting.....

Happy May 1st. Gearing up for heavy rain here in Texas over the next few days.

Hooray it's May!
My youngest turns 20 this month. So I'm about to be all out of teenagers after 14 years of having at least 1. I never had all 3 teenagers at the same time though.

Checking in for May.

I don’t think we can be friends anymore...

Checking in for May. Awful storms in Missouri last night...tornadoes and heavy rain, with more rain expected tonight.

I don’t think we can be friends anymore...


One friend of mine is a Star Wars nut, I always tell him it's a Space Soap Opera. He get's so annoyed at me. I prefer my space of the Stargate type.

Checking in for May. Only 17 days of school left then I'm off till August!

On another happy note, my oldest son left his job at a small-town police department and accepted a deputy position with the Hancock County, Ohio sheriff's department! The pride (and worry) I feel for this young man is unimaginable!

Down to 36 members after alirwin1985 dropped out last month.

Love Star Wars. I am a SiFi junkie.  Star Wars,Fire Fly, Battlestar,StarGate ETC I can watch it all day. Never liked it as a kid, but now I love it.

Awesome, I can't wait to hop on this thread and join these conversations. So exciting!

Checking in for May!! Only 31 days of school left! Woohoo!!

Checking for May! I still cant believe how fast this year has gone by

This has been a long day. I need some retail therapy.

We had our first tornadoes of the year this week. May is starting off with a bang.

Now that is a travesty!!

We had our first tornadoes of the year this week. May is starting off with a bang.

We had tornados here pop up out of nowhere a few hours ago.  Some damage but nothing severe I think.  Certainly not like the outbreak we had 5 years ago, almost to the day.

It was a beautiful day in South Jersey

hoping we can keep this up. Happy May!