Is Black Friday as we knew it gone?


44 replies to this topic

I can attest to ALL the left over stuff at Walmart. I've been able to get most of the vinyls I wanted, the ACDC Funko Deluxe Album and the 2 pack fleece lined tights in the last couple of days. The tights I ordered online last year were cancelled months later.

I feel like BF has been waning for years now and I'm thankful we haven't really needed any big purchases. My TV is STILL the 46" Plasma I got on a pre BF sale many years ago and had trouble getting out of the back seat where rep wedged it. I think our last BF outing was at Macys 2019 (maybe?) for some FREE items. Hopefully, that wasn't the last HURRAH for real BF deals and things return a little POST covid, once the supply and delivery chains have gotten restored.

I haven't really looked closely at any of the ads. Are any stores even doing "in store only" items this year?? The last few years most stores have had the majority of their items online. But they've always had a few store only purchases.

I haven't really looked closely at any of the ads. Are any stores even doing "in store only" items this year?? The last few years most stores have had the majority of their items online. But they've always had a few store only purchases.

I don't think that I have seen any that was in store only. I might be wrong but I don't think there was. I honestly believe that majority of the shopping from here on out will be online versus in store.

I think its gone too.  I used to look so forward to the early morning rush, standing in line, the thrill of seeing if you could get the item you went for.  This year, I might as well work that day (always have to use a vacation day for it).  I already bought all the items online during the early sales.  No need to even go to the stores. Aww the memories of years past and the fun it was.

I know it's gone for me. Two small children who wouldn't handle going shopping with Mommy all day well 😅 I'm only going in store to Dollar General, on Thanksgiving, and may hit a local thrift store/Amazon returns store on Friday.. but the days of shopping all night are gone.

On Walmart- if they would have even done just two events I think it would have been better. I had multiple things I would have ordered but I'm not paying shipping for a $5 toy that wasn't available for pickup. If it had been 1-2 events, I probably would have spent my usual $100-$200 at Walmart on "Black Friday". Instead, I'm at $45, only ordered in the last sale.
Online shopping has been the bulk of my shopping this year. I don't wanna tally the Amazon spending but Amazon and Target have had the best deals for what my kids want/needed.

And I'm currently trying to make a new tradition, wearing a Gottadeal shirt, planning my Dollar General run. I'm going to be there at opening even though I don't "have" to be. My husband's off so I could go any time. But I enjoy being able to say I was the first shopper at a store. And only have to be there 5-10 minutes ahead of time. It's usually one other crazy shopper 😂 and a harried person being sent for "pumpkin, butter, plates!"

19 days this year vs 5 days last year of $3+ billion in daily online sales.

Those early sales are here to stay. 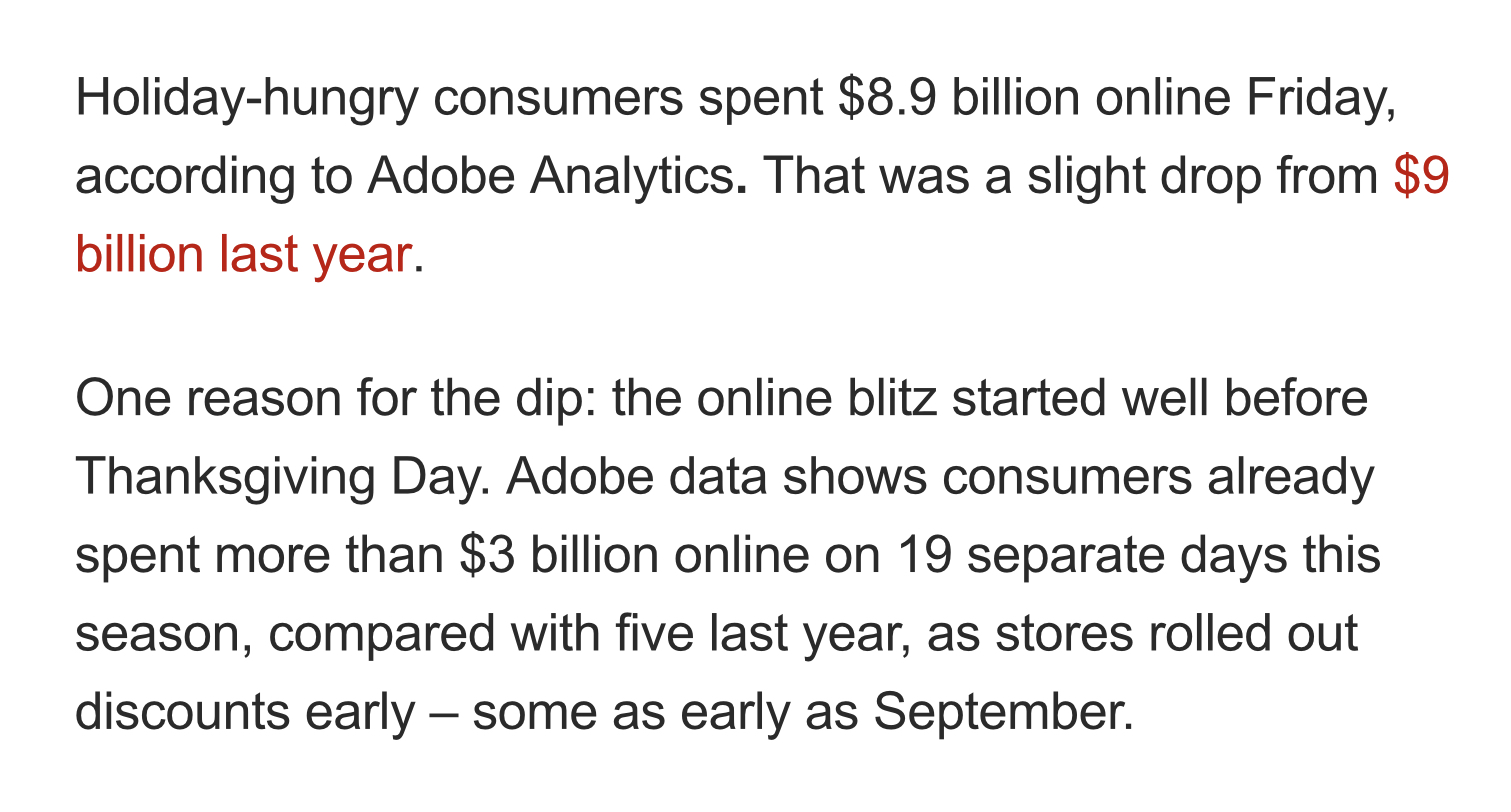 So with all the online shopping already this year. Is Cyber Monday a big deal anymore??

19 days this year vs 5 days last year of $3+ billion in daily online sales.

Those early sales are here to stay.

Except that no one shopped Thursday, so the total for Thursday and Friday this year was less than the total for Friday last year.

Except that no one shopped Thursday, so the total for Thursday and Friday this year was less than the total for Friday last year.

These are numbers for online shopping. People definitely shopped online on Thursday.

I talked with someone who works at Walmart and she said they had more people picking up from Black Friday online shopping then in store shoppers. Said that it was like that for all 3 events.

We have 3 Walmart superstores in our town, and I've spoken to different families that were at each one at opening on BF. All have said the stores were dead, not many people. I went to our closest one later in the morning on Friday, and they had pallets of everything stacked up in the middle of the aisle. We were able to get everything on our short list (mostly sheets lol).  I ended up back in the store Saturday night, and it was the same scenario.  They still had extra pallets of the BF stuff back in the garden center.

I think part of my issue is that by the time my family tells me what they actually might want for Christmas, these early sales are long over with.  At least with the old days, I had a chance to corner them and force an answer at Thanksgiving. LOL

Also, I don't have time (or really even the inclination) to compare a bunch of sales from one store to a bunch of different sales from another store, that take place over weeks, and trying to remember what I'm supposed to get at which store when.  I think this new model is just a fail for me, but I know there are a ton of people who like it and it works well for them.  I consider myself to be an extremely organized person, but IMHO this new way requires too much work on my part. (I am not a boomer LOL)

Read an article yesterday that said that Black Friday has sort of become the halftime show rather than the kickoff for holiday shopping. Sounds about right.

Back to Black Friday Discussion