What Do You Have for Christmas Dinner?


14 replies to this topic

We all had fun sharing our Thanksgiving menus and sharing recipes, so I thought I would start a Christmas menu thread - feel free to share your special cookies and treats as well.

We do Christmas Eve dinner with all the kids and grand kids and try to do something different each year. This year hubby is smoking a turkey breast and a pork roast, and we will have potato salad, and what ever sides everyone wants to bring.

Then for our actual Christmas dinner we have a prime rib roast, Yorkshire pudding, baked potatoes and usually asparagus or a side salad. 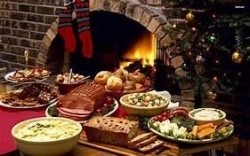 This year, I am trying to keep my Christmas dinner simple...Lasagna, broccoli casserole, fried cabbage and maybe a spiral ham...don't want to spend half my day trying to cook a big meal...I usually do a breakfast as well, but not sure about this year...

We have chicken & dumplins for Christmas dinner.  I make 3 big stock pots of dumplins, my sister fries the chicken, my other sister makes the mashed potatoes, and we all meet up at Mom's the Saturday after Christmas.

Now, I have done a big dinner for when my kids come to my house on Christmas Eve, but after it's all over and I'm tired, they leave the mess. So I don't do that anymore. LOL

We have a lot of the same things as Thanksgiving, with a few additions, and different meat.

Mama cooks, and I do the desserts.
Cookies (chocolate chip, sugar, double fudge, and I might try the orange cranberry ones posted here a few weeks ago.)
Buckeyes
Brownies
Probably cupcakes, and maybe some other candy. Haven't got that far in thinking yet!

I like the idea of La Vigilia di Natali, the Feast of Seven Fishes, on Chr-stmas Eve. But, since it is an adopted tradition, I make my own by going Jewish appetizing, i.e., lox, sable, smoked whitefish, various picked herrings, and bagels and cream cheese for those who can eat carbs. As a first year keto-er, I'll have to pass on the bagels, but I may make some keto ones with everything but the bagel seasoning on them.

Chr-stmas Day usually is the same standing rib roast meal described above, only with garlic mashed potatoes instead of baked potatoes. But, I need to rethink the Yorkshire pudding and potatoes this year. I choose to cheat a little with mashed potatoes Thanksgiving and as we finished the planned overs through the weekend. I'm only now getting back to the weight I was prior to the holiday, even though all the rest, including our stuffing and green bean casserole, was keto-field.

I usually do something simple and easy like lasagna due to the baking I do as well as the big breakfast Christmas morning. This year I am considering doing a spiral ham again (our Thanksgiving usual) with 2-3 sides, a pasta salad and rolls.

We have ham and rolls, fried chicken, all the baked goods and candy, a summer sausage, cheese crackers, chips and dip. The kids and grandkids "snack" throughout the day.

This sounds really good. I've bookmarked it for trying sometime. Thanks for sharing!

I don't know what Dad and I are doing for Christmas just yet - depends on his work schedule.

We will most likely do smoked beef roast. Home made Mac n cheese, green beans, baked ziti, rolls and a bunch of other stuff. Not sure on desserts so far. Going to someone else’s house but I will smoke the meats before we go.

Today, it’s whatever I have in my fridge. Dad & I will have our Christmas Thursday.

We had spiral ham with brown sugar, honey and crushed pineapple glaze, broccoli casserole, cabbage and lasagne and Hawaiian sweet rolls...still have to make my German chocolate cake, but with me running and visiting with extended family on Christmas eve and waking with a migraine on Christmas morning I got a late start with dinner and dessert was out of the question...