Happy September, everyone!  Getting closer and closer now

hey its the first, back on track finally 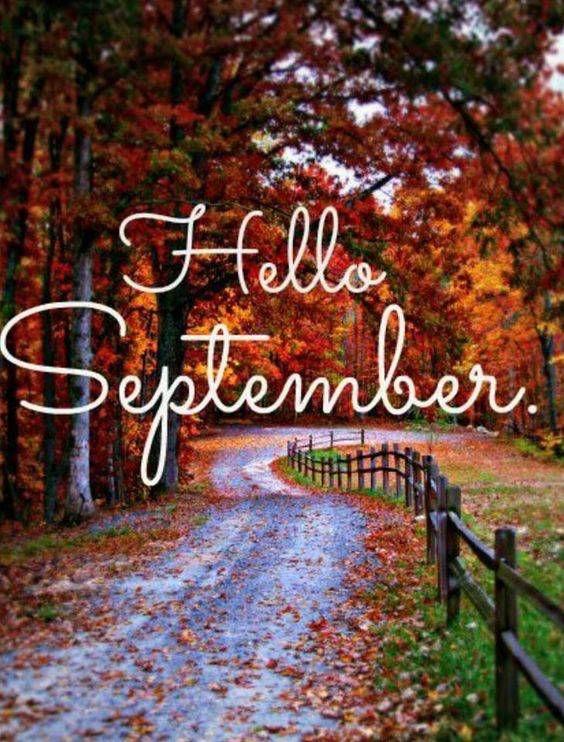 Woooo, September! First day of fall is only a few weeks away! and im seeing pumpkin spice food/drinks already coming out everywhere lol.

Happy September all!  September can be such a lovely month after a long hot summer.

And my last baby comes home tomorrow for the first time since leaving for college about 2.5 weeks ago.  I know, she barely has been gone....

Yay September. August wore me out. School started, which is always crazy for me at work. Plus moved my youngest twice (home from school, then 2 weeks later into his own place), another 1 1/2 hour trip to cut his yard, and grandson's 1st birthday.

Looking forward to this long weekend, with no plans!!

Not ready for summer to end yet

happy september it is getting closer

I am now apparently a hockey, soccer AND football mom, and I'm not sure how the last 2 really came about.  DS12 decided that he wants to continue playing for 2 soccer teams (one rec and one competitive) AND also play school football for his middle school.  I don't really know anything about football (or soccer if I'm being honest), but it seems like a lot to me.  He is loving it so far.  Thankfully football is a short season, and soccer will let up a little bit here in another month, too. Then we're just back to hockey and a little soccer for a while.  For the first time ever, DS11 and DS12 made the same travel hockey team, which is going to make things a lot simpler for us. No more dividing to conquer between DH and I, who takes which kid to which tournament or practice.  I love my kids, and I love that they love sports, but I think we're at capacity for now. LOL

I am also LOLing that the middle school (grades 7 and 8 only) has not only a football "practice" field and a game field, but also an athletic director.  These people take their football very seriously - I'd rather just bang on the glass at hockey.  At least I know how to dress for the rink!  DS12 is worried I'm going to yell at him to get the puck instead of the ball (has happened at soccer games, oops) or make some other inappropriate-for-football comments during his games.  I tell him that's part of being his mother, I get to embarrass him now.  LOL

Happy September, everyone!  And hopefully you have good weather and can enjoy the long weekend!

Hello September! Let's all make it a good one!

"If you put your mind to it, you can accomplish anything." - Dr. Emmett L. Brown

Hello September. Leaving in a few days for D23 expo. Excited to finally get back to some normal activities

Wow September is already here. Summer seems to fly by so fast. Hope everyone has a safe Labor Day weekend.

Checking in for September! Time is flying....only another couple months to go!!!

I sent out PMs to the 41 of you still in the club (according to the script - If you think I've missed you send me a PM and I'll investigate).

Please reply to the PM with your name and mailing address so I can get your prizes ready to ship next month (or maybe sooner...)

I sent out PMs to the 41 of you still in the club (according to the script - If you think I've missed you send me a PM and I'll investigate).

Please reply to the PM with your name and mailing address so I can get your prizes ready to ship next month (or maybe sooner...)

Wow.....This year is already gone. I have not even thought about Christmas...

Good morning, late to the post, but not too late

I am so sorry to hear about Queen Elizabeth. A bright spot of sanity in a mad world.
Plus she reminded me so much of my own Grandma.
Regards, chris

Leaves are starting to fall that can only mean one thing- Black Friday is growing ever so closer.

Since Rosh Hashanah is coming up, I started a menu and recipe topic in Holiday Discussion. Rather than focusing on the one holiday, I themed it as a festive meal discussion for all of the upcoming holidays. I hope y'all will join me as you start planning your menus.

Hello September!  I am so ready for cooler weather.  I live in Alabama and we probably won't see any "cold" weather until late December but we have had temps in the upper 70's and low 80's several times over the last 2 weeks which is a nice break.  The trade-off is that we've had lots of rain..