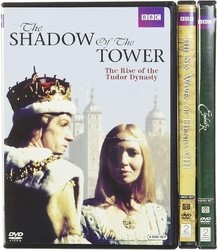 The BBC Tudors Collection combines the three most highly-praised, historically authentic mini-series ever produced about the great Tudor monarchs in one collectible set. From the heyday of BBC drama, these three tour-de-force dramas are meticulously researched and brilliantly acted, together winning 6 Emmy® awards and 8 BAFTAs (Britain’s equivalent of the Emmys). In The Shadow of the Tower, James Maxwell (The Portrait of a Lady) plays Henry VII, the first of the Tudor monarchs, who took over the throne after Richard III was killed at the Battle of Bosworth Field in 1485. Keith Michell (Murder She Wrote) received an Emmy and a BAFTA for his masterful portrayal of England’s infamously fickle king in The Six Wives of Henry VIII. And double-Oscar winner Glenda Jackson (A Touch of Class, Women in Love) turns in one of the most remarkable performances in television history, transforming herself into England’s Virgin Queen in Elizabeth R, winning two Emmys and a BAFTA. All 25 episodes of these three breathtaking dramas are included in this 12-disc collection, the definitive screen portrait of England’s Tudor dynasty.

SHADOW OF THE TOWER: Having aired on BBC2 in 1972, The Shadow of the Tower appears so authentic historically that it feels much, much older. Focusing on the rise of King Henry VII and the Tudor Dynasty, this 13-episode miniseries sheds light on not only what it took for a man to have usurped the throne in the 15th century, but also his difficulties in keeping it. Any viewer who has interest in the politics of royalty, as well as viewers who admire the cultural aesthetic of the Middle Ages, will find this program both pleasing to the eyes and highly dramatic. The episodes, having had several different writers, vary in dramatic tone and subject matter, ranging from focus on royal celebrations and fanfare, to religious and cultural matters of the time, to the ways Henry Tudor maintained rule while staving off various threats to the crown.

Disc 1 opens with "The Crown in Jeopardy," the episode that introduces Henry Tudor (James Maxwell) in his victory over King Richard, and the lovely Elizabeth of York (Norma West), both of whom star in the remaining episodes. While Queen Elizabeth gossips with her sister about Henry's desire to marry her, Henry Tudor is securing his position against knights around the country who are plotting, just after his crowning, for hostile takeover. The following episodes, "Power in the Land," "The Schooling of Apes," and "The Crowning of Apes," describe Henry and Elizabeth's marriage and pregnancy, and the ways Henry united England, often controversially, by imposing taxes, banning private liveries, and holding public executions of anyone accused of treason. Disc 2's episodes "Serpent and the Comforter" and "The White Hart" are highlights, covering first the merger of church and state during the Tudor reign, and then showing the Tudors' hard-line approach to punishment for oft-accused treason. In "Serpent," a priest is threatened with being burned at the stake for heresy simply for alleging that the church is corrupt, implying that a new era of reason and logic is in the air. In "White Hart," Henry VII decides whether or not to behead his council member, William Stanley (Robert James), for treason. The last half of the series, from episodes like "The Fledgling" to "King Without a Face," focuses on two main plots, the first being Henry and Elizabeth's childrearing and their efforts to marry off their son and daughter in the interest of forging Scottish and Spanish alliances. Secondly, extreme dramas ensue surrounding those "pretenders" like Perkin Warbeck (Richard Warwick) who claim to be the true heir to the throne, while the real boy, the Earl of Warwick (Christopher Neame), has his own problems to deal with. In all, this sweeping period drama allows one to imagine what life was truly like during this turbulent time. It depicts Henry VII with an equal blend of villainy and heroism, giving him a well-rounded character thanks to James Maxwell's excellent performance. There's never a dull moment in the shadow of London Tower. --Trinie Dalton

THE SIX WIVES OF HENRY VIII: A British television series originally broadcast on CBS (and rebroadcast on PBS) in America in 1971, The Six Wives of Henry VIII remains a painless way to learn something about royal history and its impact on the political and religious landscape of England. Keith Michell stars as King Henry VIII, who assumes the throne as a boy after the death of his older brother and inherits the latter's Spanish betrothed, Catherine of Aragon (Annette Crosbie), as well. Growing up and increasingly complicated in personality, with an ever-growing appetite for elusive happiness as well as power and food, Henry maneuvers (and is maneuvered by) forces around him to break from Rome and create the Church of England, in part to accommodate his wish for a divorce.

Each story of the king's successive brides takes up an entire episode in the series. Dorothy Tutin plays the doomed Anne Boleyn, Anne Stallybrass is Henry's favorite, Jane Seymour, Elvi Hale is Anne of Cleves, Angela Pleasence is Catherine Howard, and Rosalie Crutchley plays last-in-line Catherine Parr. A very large and fine supporting cast adds intrigue and extra layers of tragedy to the proceedings, especially John Baskcomb as Cardinal Wolsey, Wolfe Morris as Thomas Cromwell, and Ralph Bates as Thomas Culpepper. Each 90-minute episode was crafted by a different writer, but the series holds together very well under Keith Michell's dazzling performance as the despicable if sympathetic Henry, whose emotional arc over many years and losses is something to see. --Tom Keogh

ELIZABETH R: Glenda Jackson is majestic in the six-video miniseries from the BBC, Elizabeth R. Covering the entire reign of Elizabeth I, from her struggles with her half-sister Mary just before being crowned as queen to her death in 1603, the series profiles the life of the Virgin Queen in detail--and with historical accuracy--not possible in the as beautiful, but much shorter, theatrical release, Elizabeth. Religious conflicts, her struggle over the execution of her cousin Mary, Queen of Scots, battles with Spain, court politics, and of course her flirtations with Robert Dudley (portrayed as an almost-comical fop by Robert Hardy) and her decision to remain unmarried are just some of the highlights of this magnificently costumed and finely acted piece. Jackson skillfully captures the capricious moods and incredible intellect of the queen who defied the pope and the conventions of the time as a strong-willed woman, and characters from textbooks--Sir Francis Bacon, Sir Walter Raleigh, King Phillip II--come vividly to life. Elizabeth R (and for those not in the know, the "R" is for "Regina") is a splendid melding of history and entertainment, and as thorough as this series is, you will still long for more. --Jenny Brown