Only At Walmart: Monopoly: Jeff Foxworthy Edition Board Game $10.00 @ Walmart.com


1 reply to this topic

This looks like fun! Walmart.com offers the
Only At Walmart: Monopoly: Jeff Foxworthy Edition Board Game
$10.00
*May be available for free store pickup or get Free 2-Day Shipping on orders $35+ 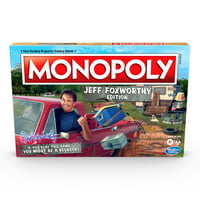 Get ready for loads of fun with this Monopoly: Jeff Foxworthy Edition board game inspired by the hugely popular comedian, Jeff Foxworthy. Move around the board as a lawn ornament, mounted bass, tireless car on blocks, a chainsaw, trucker hat, or a deer. Buy up local establishments, trailers, and cabins. Community Chest cards and Chance cards can give players advantages such as collecting money if their mullet wins best in show, or being able to advance to Sweaty's Barbecue because the health inspector's on vacation. So get family and friends together for a dawgone fun Family Game Night. This game is for 2-6 players, ages 8 and up.

Foxworthy Outdoors, LLC.
The Hasbro, Hasbro Gaming, Parker Brothers, and Monopoly names and logos, the distinctive design of the gameboard, the four corner squares, the Mr. Monopoly name and character, as well as each of the distinctive elements of the board and playing pieces are trademarks of Hasbro for its property trading game and game equipment.

Back to Dead & Expired Deals