Walmart.com offers the
Beetlejuice (20th Anniversary Deluxe Edition) (DVD)
$3.99
Was $9.95
*May be available for free store pickup or get Free 2-Day Shipping on orders $35+ 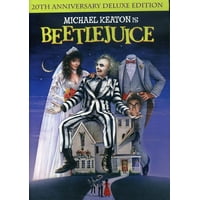 What acouple of stay-at-home ghosts to do when their beloved home is taken over by trendy yuppies? They call on Beetlejuice, the afterlifexe2x80x99s freelance bio-exorcist to scare off the family xe2x80x93 and everyone gets more than she, he or it bargains for! Tim Burton guides this PG-rated comedy monsterpiece whose stars include Alec Baldwin, Geena Davis, and Winona Ryder. And Michael Keaton is Beetlejuice, the ghost with the most who flings one-liners, spins into grotesque forms, gobbles insects, and who just canxe2x80x99t leave the ladies (living or dead) alone. Ghoul love it! Beetlejuice (20th Anniversary Deluxe Edition) (DVD)