Jack and the Beanstalk Blu-ray $4.99 with Free Prime S&H @ Amazon.com

Amazon.com offers the
Jack and the Beanstalk Blu-ray
$4.99
Eligible for FREE Super Saver Shipping on orders over $25 or with Amazon Prime 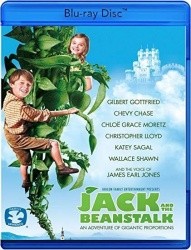 A fairy tale character who is about to flunk out of fairy tale school, Jack (Colin Ford, "Push") must perform a heroic deed by Monday or fail miserably, just like his father before him. Anxious to make good, Jack sells his computer for a handful of magic beans and a mysterious book that records his adventures as he's having them. Accompanied by his sidekick Grayson, a goose who ate a bean and transformed, Jack climbs the magic beanstalk to recover the fabled Harp of Destiny from the evil Giant who lives in the sky. Helping Jack on his perilous quest is the spunky Jillian, a fearless young girl whom Jack meets on his adventure and who just may have a hidden agenda. Featuring classic comedians including Gilbert Gottfried and Chevy Chase.